Young people currently suffer age discrimination routinely. We believe that this needs to be challenged; and that the rights of young people need to be protected.

We have gathered lots of evidence that shows that young people are discriminated against simply because of their age.

Examples of how young people are currently discriminated against in terms of the delivery of provision of goods facilities and services include:

·      Exclusion from retail and leisure services on the grounds of age

The EU Charter of Fundamental Rights, article 21 states that;

“Any discrimination based on any ground such as sex, race, colour, ethnic or social origin, genetic features, language, religion or belief, political or any other opinion, membership of a national minority, property, birth, disability, age or sexual orientation shall be prohibited”.

We also feel that the legislation would have been in direct contravention of the United Nations Convention on the Rights of the Child.

We are deeply concerned that some of our political representatives would suggest that it is ok for shopkeepers to limit the numbers of young people entering their shop or being requested to leave their bags at the door, as part of a theft management strategy.

The NIYF consulted widely within its membership to establish the views on this legislation and to hear first hand from young peoples’ personal stories how they have been discriminated against in the provision of goods, facilities and services:

They informed us that:

·      They had been discriminated against in their interactions with their doctor (their doctor speaking to their parent and ignoring them).

·      They reported discrimination in their interactions with the police (particularly when being told to move along or to separate into smaller groups).

·      They spoke of public transport (buses and taxis) discriminating against them both by driving past them and the way in that they spoke to them.

·      They highlighted the regular occurrence of being refused entry into shops either because they were in school uniform and/or there were several of them wanting to enter the shop. In such circumstances they were told to leave their school bags at the door. Others reported being constantly followed by security staff and feeling that they were not to be trusted on their own They spoke of certain shops having fitted mosquito devices, which omit high-pitched noise that only young people can hear. The aim of which is to stop them standing near its location

We will continue to campaign for legislation that protests people of all ages.
Join our campaign by emailing info@niyf.org 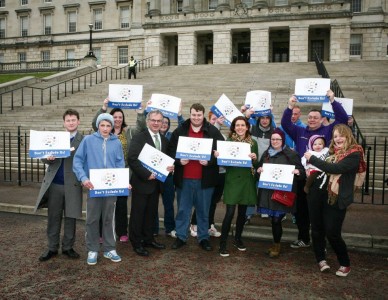