Four young people from NI attended the 72nd session of the UN Committee on the Rights of the Child at the Palais Wilson, Geneva on Monday the 23rd & Tuesday the 24th May. 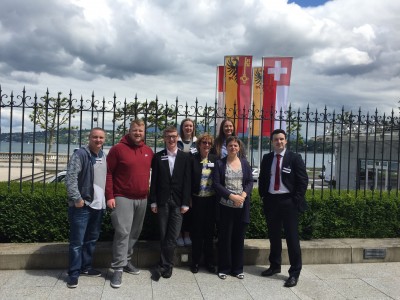 The young people, drawn from the NI Youth Forum Executive Committee; Big Lottery Funded Champions 4 Change Project and Youth@CLC, travelled to Geneva to represent the views of their peers as a culmination of almost two years work lead by Children’s Law Centre and Save the Children (NI). Over 900 young people participated in the ‘Our Lives in Our Words’ consultation through questionnaires and focus groups carried out during 2014 & 2015 providing a strong evidence base on the views of young people.

Key issues that emerged were clustered under four key themes: ‘Mental Health’ – and a call for adequate services for young people; ‘Participation’ – and the call for a NI Youth Assembly, votes at 16 and mandatory, meaningful schools councils; ‘Discrimination and Poverty’ – and a call for Stormont to do more to act against religious, racial, sectarian and age based discrimination; ‘Knowledge of Rights’ – and a call on the government to do more to inform young people about the UN Convention on the Rights of the Child and other Human Rights legislation.

Anne-Marie Hesketh, representing Youth@CLC, (aged 17, from Glengormley) who also attended the 72nd pre-sessional hearing in October commented that “this whole experience has been amazing; to be able to feed in directly to the UN Committee based on the views of young people living in our communities is a huge honour; taskforce members are really interested in what we have to say and have taken on board how difficult it can be for young people, particularly those who are most vulnerable”

During, what was an extremely intense few days young people had a semi formal meeting UN task force members at the Palais Wilson, Geneva; and presented to them directly on the issues faced by young people in Northern Ireland; providing commentary on the areas discussed by government officials during the task force meeting earlier that day.

Task force members showed a key interest in the issues faced by children and young people growing up in a post conflict NI and asked key questions of the government which will form the basis of a series of recommendations that will be published in June by the UN Committee.

William McCartney of the C4C project (18, from Rathcoole, Newtonabbey), discussed the importance of knowledge of rights saying that “most young people don’t know their rights; we are not taught about them in school and it seems as if government don’t want us to know them; the odds are constantly stacked against the young and we deserve better”

Running along side the taskforce hearing were a series of meetings led by young people with various NGOs as well as with their peers from England, Scotland and Wales where in-depth dialogue took place with regards to areas of similarities and differences for young people growing up in different jurisdictions across the UK.

Joe Higginson, NIYF Exec member (17, Bangor) commented that “young people across the UK feel constantly discriminated against; we are portrayed negatively in the media, there are not many leisure facilities that are accessible to us and society does not share the view that we have a right to socialise in public spaces. We are routinely harassed and intimidated and living in a divided society makes this worse for young people from NI.”

Young people discussed child poverty and the impact of austerity measures on the most vulnerable; government policy making that seldom takes into account their views and the need for more investment in article 12 of the UNCRC – based on promoting the voices of young people.

Interestingly Stormont officials directly referenced the work of NIYF and the NI Youth Congress during their input which bodes well for the call to establish a Youth Assembly in NI.

Rebecca Connolly, NIYF Vice Chair and Youth@CLC member, (18, Crumlin, Antrim) discussed the importance of participation and lowering the voting age; “young people are systematically disempowered, those under 18 can’t vote, we don’t have a Youth Assembly and Schools Councils can be tokenistic. We have lobbied for a Youth Assembly for around 10 years yet Stormont fails to deliver. Last year we done it for ourselves and set up a NI Youth Congress. This was run at the expense of the Youth Forum and was not a government initiative, although we were permitted the use of the Assembly Chamber for our Annual sitting. I find it very interesting that it was discussed as part of NI’s feedback to the committee when questioned about the absence of a Youth Assembly”.

In summing the outcomes of the taskforce hearing, Kirsten Sandberg thanked government representatives for their input but also highlighted that their feedback does not always reflect what they  are hearing directly from young people.

NIYF Director Chris Quinn commented that “We are immensely proud of the young people and Youth Forum staff for their participation with the UN taskforce. The opportunity to attend the meeting and feed in directly to task force members is a pinnacle of Youth Participation and vitally important in protecting young people’s rights as enshrined in the UNCRC. We would like to thank the Children’s Law Centre and Save the Children for collaborating with us on this very important piece of work; as well as to thank OFMDFM for supporting young people to travel to the hearing. We look forward to continuing this work when the young people return; including the publication of the UN Recommendations in June; and a UNCRC Youth Conference in October, which we will host in partnership with CLC & the Belfast Youth Forum.”

Paddy Kelly, CEO, Children’s Law Centre Added “The young people from NIYF and youth@clc who attended the examination of the U.K. Government by the UN Committee o the Rights of the Child in Geneva today and yesterday powerfully represented the voice of Children from across NI. They gave strong testimony to the Committee on how children’s rights were being denied across a range of issues in Northern Ireland. This was reflected in the questions the committee’s task force put to the UK government. We now look forward to the committee’s recommendations to the UK government on what action they need to take to implement the UN Convention on the rights of the child in Northern Ireland.”

For more info on the UN Convention on the Rights of the Child check out our UNCRC section under projects. 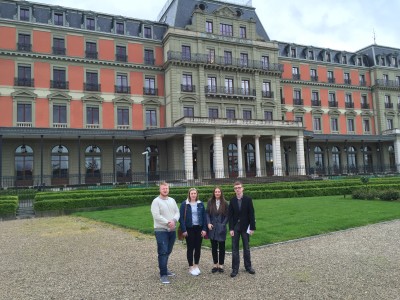