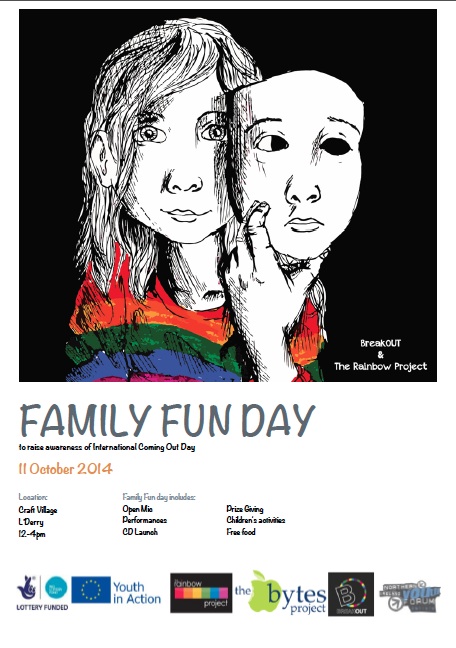 Two youth groups from Derry and Donegal working for Lesbian Gay Bisexual and Transgender (LGBT) rights are working together to celebrate International Coming Out Day on October 11.

The Foyle Rainbow Project and BreakOUT Letterkenny groups joined forces to create the ‘I’m Coming Out’ Project to raise awareness of the issues around International Coming Out Day.

The young people have written a song ‘Free to be me’ and collaborated on a creative writing project in which they share their own personal coming out stories.

In a survey carried out by the Rainbow Project last year, it was found that on average young gay people in Northern Ireland became aware of their sexuality from the age of 14, while the average coming out age was 21.

The ‘Through Our Minds’ study found that young people were most likely to be open to their friends, with 75% saying their friends were aware of their sexuality, while 63% said their family knew they were gay.

The ‘I’m Coming Out’ project co-ordinator, Michelle Nolan said the aim was to reach out to isolated young people across the North.

She added: “Coming out to their family and friends can be one of the most difficult decisions for young gay people in Northern Ireland. This family fun day is a celebration of the LGBT community and a message to young isolated gay people that they are not alone.”

Michelle works on the Champions 4 Change project, an initiative managed by the Northern Ireland Youth Forum (NIYF) and The Bytes Project and funded by the Big Lottery. Michelle and the young people have successfully applied for funding from the British Youth Council through the EU Youth Initiative Programme.

The ‘I’m Coming Out’ project has been running from April 2014. Its overall aim is to reach out to isolated LGBT youth across the North, promote LGBT services and promote awareness of International Coming Out Day.

For more information about the family fun day and International Coming Out Day, contact Michelle Nolan, michelle@bytes.org 07713195009. Go to: www.niyf.org and www.bytes.org