NI Youth Forum report gets the views of ‘Sons of Ulster’

Young loyalist band members believe they have been demonised by a combination of negative media headlines and a lack of understanding of their culture by Nationalists and Republicans.

That was one of the key findings of a major report exploring the attitudes of young loyalist band members launched by the Northern Ireland Youth Forum (NIYF) at Stormont today.

NIYF Chairperson Martin McAuley said the aim of its in-depth ‘Sons of Ulster’ report was to help inform the wider public about a culture that has become marginalised in recent times.

He added: “There has been a lot of negative coverage about loyalist culture and we want to give a voice to young loyalists, to hear from them the positive benefits of becoming members of flute bands.”

“This report acknowledges that young people growing up in loyalist communities are not simply passive participants but want to be active stakeholders in their tradition.

“It is our intention to take the learning from this report and begin work on a comparative project with young people engaged in republican expressions of cultural identity. Our long-term ambition is to create a wide reaching piece demonstrating the attitudes of young people from all traditions to some of the most difficult issues we face in the region”

The Sons of Ulster: Exploring Loyalist band members’ attitudes towards culture, identity and heritage, was compiled and written by the Northern Ireland Youth Forum supported by a team of peer researchers aged 16-25. While the report highlighted the negative stereo-typing of loyalist bands, it found that young people regarded them as a way of reducing anti-social behaviour and improving their confidence and communication skills.

The NIYF had invited Richard Haass and his team to the launch and have sent a copy of the report to him as a contribution to his efforts to resolve issues over parades, flags and the past.

The project involved six months of painstaking research carried out by the NIYF with the help of a steering group made up of young people. The research included a lengthy series of interviews, focus groups and personal testimonies.

The research showed that young people regarded the band as having a very positive effect on their life in terms of making friends, providing opportunities to see new places, and developing confidence and new life skills.

One common theme that constantly came up was the camaraderie and the sense of togetherness of being in a band.

As one young person said: “I play in a football team and we have never been able and never will develop the sense of team that exists within the band…it also provides you with a sense of responsibility, self discipline and pride”

The young people believe that bands have been used to criticise Unionist and Loyalist culture and identity. They point to media stories which often describe bands as consisting of drunken louts abusing using their culture as an excuse to intimidate different communities.

Overall, the participants regarded the bands as their only real opportunity to express the culture, remember their past and share their identity with wider society. They argued that the band was an opportunity for young people to get involved in activities that reduced the potential for them to become involved in anti-social behaviour.

You can download the report here SONS OF ULSTER Final report 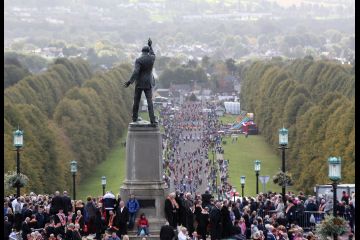