Monday marked the launch of the Northern Ireland Anti-bullying forum sponsored anti-bullying week. As part of a week long period of action to raise awareness and challenge bullying across society, Northern Ireland Youth Forum members have been involved in a poster campaign being rolled out in schools, libraries, doctors surgeries and on public transport.

Youth forum campaigns officer and poster team member, Amy Lecky, said “Bullying remains a huge issue and no groups is more at risk than young people. No one should have to suffer that kind of emotional, mental or physical abuse  anywhere; be it at school, at a youth club, online or just in the street”

During the last week some of the youth forum’s project groups have been hopping on and off buses on schools routes, speaking to other young people about their experiences of bullying and promoting the message that Everybody is Somebody. Joe Hamill is the participation co-ordinator on the youth forum’s Champions for Change programme and accompanied the groups during the week. He commented “As part of this  programme we are currently working with a group of young women and men from the LGBT community. Given this groups sexual orientation they have  experienced many forms of bullying and homophobia attacks. They were keen to relay these experiences to other young people and to help victims of bullying to speak out” adding that “The young people were also interested in helping young people who have been perpetrators of such activity to realise the effects of their actions on the victim”

The Youth Forum is proud to have taken part in this extremely important initiative and looks forward to working with our youth sector partners and young people in tackling this pressing problem. 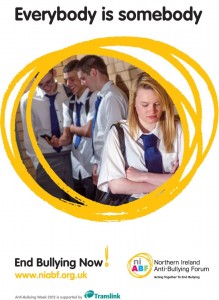